Getting to school as a boy growing up in Singapore in the 1970s could be soggy affair at times.

Tropical downpours overwhelmed drainage systems, leaving parts of the island impassable. Students braved the rains and rising waters, turning up wet and bedraggled, if they made it at all.

Thankfully, this became a thing of the past by the late 1980s. Massive flood alleviation efforts caused this story to recede from newspaper front pages, as a modern city-state emerged.

Yet, decades on, we seem to be heading back to the future.

But even as the authorities rushed to unveil plans in response to the public concerns, a minister warned that as intense rainfall was becoming more common with global warming, people might have to get used to flash floods from time to time.

Rising sea levels is an existential issue for this low-lying island, about a third of which is less than 5 metres above the mean sea level. The country’s Prime Minister Lee Hsien Loong has estimated that over $100 billion (Singapore dollars) might be needed over the next decades to tackle the rising tides caused by warming seas and melting ice sheets.

But Singapore is not alone. New York City declared a “flash flood emergency” earlier this month after record levels of rain in the wake of Hurricane Ida.

Over 300 people were killed in China’s Henan province in August, when a year’s worth of rain fell in three days, leaving many trapped in underground train carriages and road tunnels, as water levels rose.

Devastating floods in Germany and Belgium, droughts in Brazil, heatwaves in India, Australia, and the Pacific Northwest of the United States, wild fires in California and Canada, as well as across the Mediterranean and Amazon regions  – such extreme weather events, once the stuff of movies, have been playing out across the planet this year.

Get used to it, say the climate scientists, for these are signs of what’s to come.

“It also shows that climate change is affecting every region on our planet,” he said, following a UN report in August, dubbed a Code Red warning for humanity and an urgent call to action.

Yet, who can blame a weary world for being distracted, with so many countries still in the grip of a rampaging virus that refuses to yield.

But, as the IPCC’s Dr Lee rightly notes, the Covid-19 pandemic is a “foretaste of what climate change could do to our society, to nature and our lives”.

“Both climate change and Covid-19 have shown us the risks of an unthinking and rapacious approach to nature and its resources.”

Lamentably, while the world’s scientists were quick to step up to the Covid-19 challenge, delivering effective vaccines, efforts to curb the outbreak have been hampered by populist politicians, global inequalities, and a pandemic of misinformation.

Divisions and delays have compounded the challenge: the virus has continued to spread, mutate, and unleash new waves of infections.

The Covid-19 experience has made plain how difficult it will be to forge a global consensus on tackling the climate crisis.

The signs of this looming challenge, and the science behind it, grow clearer by the day. But here too, politics, inequality and misinformation confound concerted action.

This is where professional newsrooms have an important role to play.

And it is why this year’s World News Day on September 28, will focus on the climate crisis.

Some 500 newsrooms from around the world will come together to tell the story of how climate change is already impacting the lives and livelihoods of communities, and how they are grappling with it.

Professional newsrooms, with resources and expertise, are best placed to tell these stories in clear, compelling and credible ways.

One of the best examples of this, in my view, is the recent BBC documentary, The Truth about Climate Change.  In it,  environmentalist David Attenborough sums up the facts and makes the case for action, in his friendly-scientist-you-can-trust way.

“In 4,500 million years, our world has gone through many natural changes. Now, it is changing once again,” he warned.

“But this time, we ourselves are contributing to those changes. We are causing the world to heat up.

“If we continue to behave as we are doing, our children and grandchildren will have to deal with potentially catastrophic changes.

“The vast forests of the Amazon could wither and burn. The oceans could turn acid, destroying much of the life they presently contain.

“The Arctic could be transformed. Its ice could melt and its most famous animals vanish forever.

“Rising tides could cast millions of people adrift. Many of our coastal cities could be flooded, and drowned.”

There is still time to act if the world is to minimise these changes, he adds. But time, that most non-renewable of resources, is running out.

Sir David, 93, has been making such pleas for some time.

Now is the time to hear him, and heed.

Warren Fernandez is Editor-in-Chief of The Straits Times, the leading English language news title in Singapore, and President of the World Editors Forum (WEF). 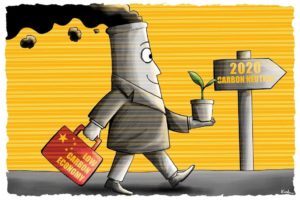