Warren Fernandez: Why real news matters amid the twin pandemics of Covid-19 and fake news

Over 150 newsrooms from around the world will come together today to mark World News Day, including journalists from Toronto to Taipei, Spain to Singapore.

This, however, is not an occasion for journalists to pat ourselves on the back for the work we do. Rather, the focus is on how journalists go about reporting on issues that matter to our audiences.

In the face of the Covid-19 outbreak, audiences have been turning to professional journalists like never before.

They want answers on how to stay safe, as well as how to safeguard their jobs. They need to know the facts. They need help separating fact from fiction, amid the pandemic of fake news that has also gone viral. They are looking to people they can trust to help them join the dots, to make sense of these bewildering times.

At a time when so much has been turned on its head, this much has become clear: Real news matters. The truth matters. Objectivity matters. Balance and fairness matter.

These are hallmarks of professional newsrooms. These newsrooms strive to tell the stories that matter to the communities they serve.

Consider these examples. In March, the Brazilian media group 100 Fronteiras told the story of the trauma caused by the sudden closing of the International Friendship Bridge between the towns of Ciudad del Este in Paraguay and Foz do Iguaçu in Brazil.

“Many families had to split up. People who live in Foz, but have relatives on the other side of the bridge and now only see themselves through the cell phone screen.

“Never before in the history of the world has a hug been so desired. Yes, people really only value it after they can’t. Now we are feeling it in our skin and it hurts.”

On the other side of the earth, a similar story of separation and loss was playing out. In my hometown, Singapore, the land-bridge popularly called the Causeway that many use to cross into Johor Bahru in Malaysia, also had to be shut down to stem the spread of the virus. Families, workers, businesses and communities, that had been intertwined for decades, were suddenly left bereft of each another. Their stories were told in the pages of The Straits Times.

In the face of a global pandemic, our common humanity also rang out in stories of courage and hope which many newsrooms recounted. In a special report in February, titled ‘On the frontlines of the coronavirus’, we profiled the doctors, nurses and officers in Singapore who were fighting the virus. Likewise, The Canadian Press traced a patient’s harrowing journey from emergency room to Intensive Care Unit and finally to recovery and rehabilitation, highlighting the many people who pitched in to save one man’s life in a feature in April.

Across the planet, newsrooms have been bringing these stories to our audiences, not only to inform and educate, but also to inspire and uplift communities.

In the process, Covid-19 has reminded us of many things we had taken for granted.  It has made plain the importance of good governance, the value of trust in leaders and institutions, and the solace and strength that families and communities provide. It has also highlighted the critical role that a credible and reliable media plays in the health and well-being of our societies.

Ironically, however, the pandemic has also posed an existential threat to many newsrooms. While audiences have surged, revenues and resources have plunged, making it harder for journalists to keep doing their jobs.

World News Day is an opportunity for us to ponder why this matters.

Real News matters if we are to make sense of the bewildering developments around us. Credible journalism is critical if we are to have informed debates about where we might be headed in a post-pandemic world.  Newsrooms that are engaged with their readers can help rally communities in a time of wrenching change.

Indeed, as the French author Albert Camus mused in his novel, The Plague, which tells the story of how the inhabitants of a town came to terms with a deadly outbreak: “The strongest desire was, and would be, to behave as if nothing had changed…but, one can’t forget everything, however great one’s wish to do so; the plague was bound to leave traces, anyhow, in people’s hearts.”

Wittingly or otherwise, the “traces in people’s hearts” that are left post Covid-19 will have to be dealt with, when the pandemic now still raging around the world, eventually, passes.

Societies that remain well served by good news organisations will be better placed to do so.

Professional journalists and newsrooms will be vital in helping communities survey the ravaged landscape around them. They will also be critical for the honest conversations that will be needed to figure out the way forward.

That, put simply, is why the success and sustainability of the media matters – now more so than ever– to us all. 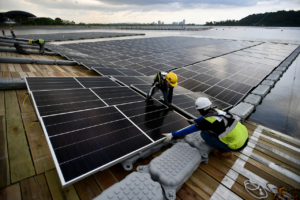