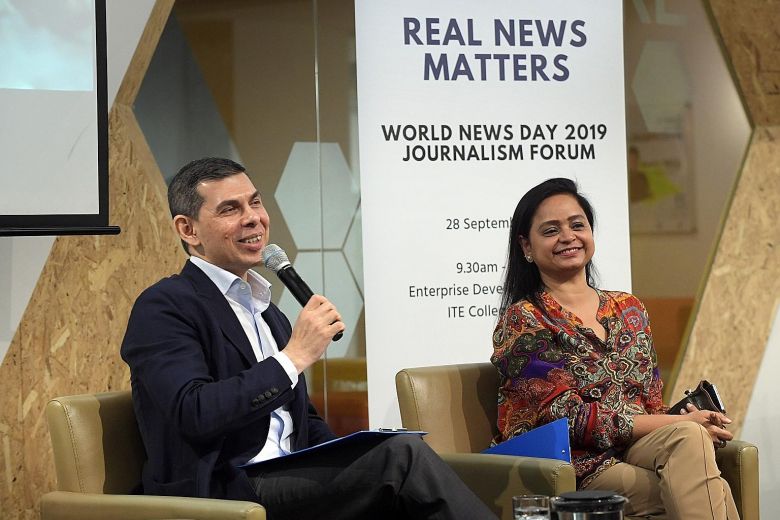 In an increasingly complex world with misinformation on the rise, journalists play a crucial role in providing reliable information to support reasoned debate.

That is why the work that professional newsrooms do, in fact-checking and ensuring a balanced, objective and unvarnished account of events, is so important, said Mr Warren Fernandez, editor of The Straits Times, on Sept 28.

“While the world is more connected today and more people have much more information available at their fingertips, the irony is that societies are not necessarily better informed or equipped to make the difficult choices we need to if we are going to address the many challenges we face,” he said in opening remarks at the Real News Matters journalism forum, which marked World News Day with a series of discussions.

World News Day celebrates the work of professional news organisations and their impact and aims to raise public awareness of the role that journalists play in providing credible and reliable news and views.

“Instead, discussions turn into shouting matches, which tend to be dominated by those with the loudest, most nasty or persistent – or often, the best financed – voices,” said Mr Fernandez, who is also editor-in-chief of Singapore Press Holdings’ English, Malay and Tamil Media Group, and president of the World Editors Forum, the network for editors within the World Association of Newspapers and News Publishers (Wan-Ifra).

“Each one of us ends up the loser – it is your views, your society, your future that is degraded in the process.”

He also warned of the rise of fake news, with dubious content spreading over phones and social media.

The audience participated actively in asking questions, which ranged from how to deal with the speed at which fake news spreads, to how askST, part of the publication’s efforts to fight fake news, deals with the volume of requests.

The forum was held at the Institute of Technical Education (ITE) College Central and jointly organised by Wan-Ifra and the National Youth Achievement Award Council.

The event, which saw around 100 attendees, including students, journalists and members of the public, also featured two panels on the impact of journalism.

One of them was titled It Changed My Life, named after an award-winning series by ST senior writer Wong Kim Hoh, who was one of the panellists.

The other panellists were Dr Mustafa Izzuddin, a research fellow at the National University of Singapore’s Institute of South Asian Studies, who talked about the relationship between academics and the media; and ITE College Central student Javier Ng, who shared how the media helped in his anti-drug advocacy.

The panel was moderated by Ms Alysha Chandra, editor-in-chief of The Octant, a Yale-NUS College student publication.

The other panel was made up of participants from the Asia Journalism Fellowship, who spoke about covering conflict.

Ms Kalani Kumarasinghe, features editor at Sri Lanka’s The Daily Mirror, shared about the chaos caused by the bomb attacks that left more than 250 dead on Easter Sunday, shattering a decade of relative peace.

“Imagine this. You are trying to interpret the bomb scare, and then there are fake news tweets coming up about bombs (going off)… Even within our newsroom we were panicking because we saw a tweet saying there was a bomb right across our office,” she said.

With her were Mr Maran Htoi Aung, editor of Myanmar’s Kachin Waves, who spoke about the difficulty of gathering information and providing a balanced account on the conflict in his home state of Kachin; and Ms Victoria Tulad, senior news correspondent at GMA Network, who spoke about her work in covering Philippine President Rodrigo Duterte’s war on drugs.

Said Ms Tulad: “It is a privilege to witness history, but it is also our responsibility to make sure it is not forgotten.”

Mr Koh Jun Jie, 18, said he learnt a lot from the forum and was inspired by some of the stories.

“I have a better knowledge of world events and what being a journalist involves,” said the Year 2 ITE College East student. 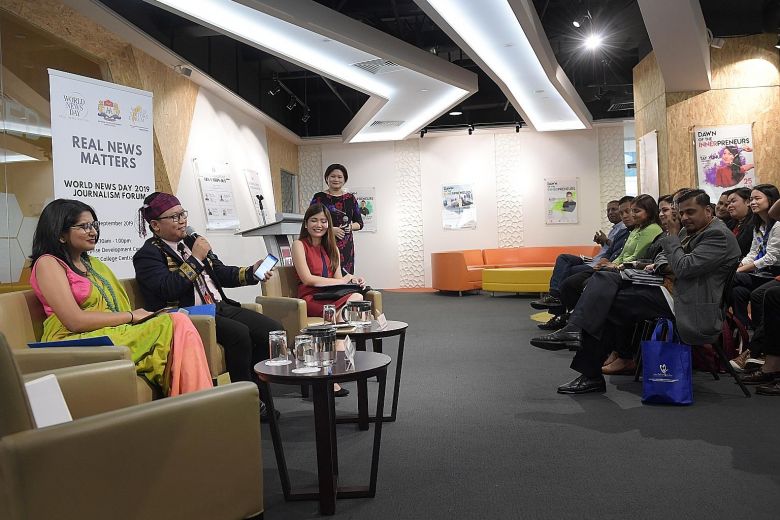 One journalist spent her birthday at a morgue, watching as plastic bags filled with the limbs of victims in Sri Lanka’s bomb attacks on churches in April were brought in. It was so horrific, she could not report it.

Another witnessed the lifeless body of a youth, shot by Philippine police in the country’s war against drugs, transported to a hearse. He was only 17 – the same age as the journalist’s sister.

Faced with at times senseless and cruel violence, journalists who report from the front lines of conflict do some of the profession’s most important work, and some of its most exacting, and potentially lethal, as well.

Mr Maran Htoi Aung, editor of Myanmar’s Kachin Waves, shared the difficulties of covering the ongoing conflict in Kachin state between the country’s military and the Kachin ethnic armed group.

The United Nations and other groups have found several gross violations of human rights perpetrated by the military.

“It is very difficult to get information from all sides… Especially for an ethnic (minority) person, there is the danger of being arrested, and it is difficult to get anything from government officials, who are Burmese,” he said.

It is the same for GMA Network senior news correspondent Victoria Tulad covering Philippine President Rodrigo Duterte’s war on drugs. Her exclusive in August 2017 on 17-year-old Kian Loyd delos Santos, who was killed in Caloocan city, north of Manila, had differing accounts.

While the police said he had been firing a gun, closed-circuit television footage showed they had taken him to an alley and, according to eyewitnesses, shot him for suspected possession of drugs.

For Ms Kalani Kumarasinghe, features editor at Sri Lanka’s The Daily Mirror, the initial chaos after the Easter Sunday bombings was compounded by the government and military’s lack of response.

The media would later find out that the government had known about, but not acted on, information of the attacks for at least two weeks.

“Social media caused a lot of problems for us as well,” she said. At one point, there were even rumours that Muslims were using pills to sterilise Sinhalese people, which “spread like fire”.

And the effects of covering such violence up close takes a toll on one’s mental and emotional health, they told The Sunday Times.

Ms Kalani said she nearly broke down at one point: “When I was spending that day in the morgue, that was a time when I really questioned what I was doing.”

But they carry on.

“You can’t avoid getting traumatised, so you have to be strong, you have to move on,” said Ms Tulad. “We continue to hope that our stories can bring about change.”

In Ms Tulad’s case, her story did spark change. The public outcry it created eventually led to the cops who killed Kian being jailed.

In the end, the motivation for all three journalists was the same.

As Mr Htoi Aung put it: “Why am I still here? Because I think, I have to tell the truth.” 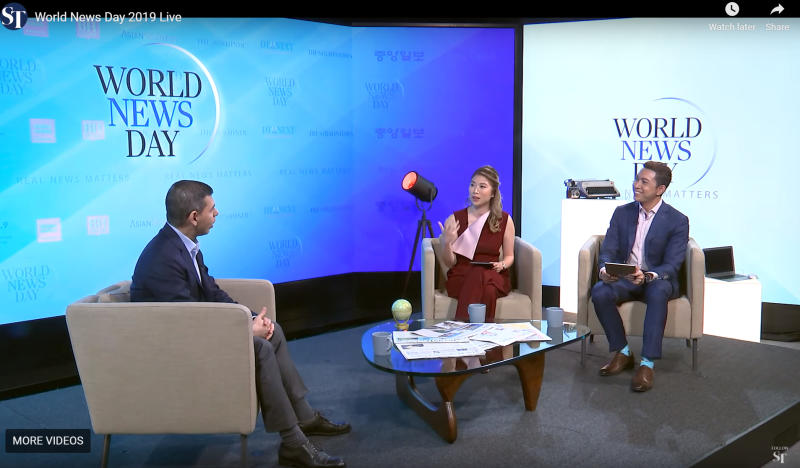 These were some of the answers from people asked to describe journalism in one word for a live video show by The Straits Times to mark World News Day yesterday, which celebrates the work of professional news organisations and aims to raise public awareness of the role that journalists play in providing credible and reliable news and views.

The thoughts of ordinary folk kicked off the clip, which took a behind-the-scenes peek at how journalists cover everything from breaking news to exposing corruption in official bodies.

“It was about celebrating journalism, showcasing the lengths and hardships journalists go through to deliver stories,” said Mr Zia-ul Raushan, who produced the clip with his colleague Irshad M.

Much thought went into the set design, which included items like a typewriter, an old camera and a TV set to trace journalism through the decades, said Mr Irshad. The ST show was aired on YouTube at 3pm for a global audience and can be viewed on www.worldnewsday.org.

The paper’s multimedia journalists Alyssa Woo and Hairianto Diman spoke to some of the newsrooms participating in World News Day 2019 about their stories. These included the Philippine Daily Inquirer’s stories that exposed corruption in the state insurer, and India’s The Quint, which shone a light on bonded labour in Tamil Nadu.

Another was the South China Morning Post for its coverage on the Hong Kong protests. Chief news editor Yonden Lhatoo said: “We bring out the legitimate grievances of the protesters but, at the same time, we don’t gloss over the excesses and the carnage they are causing.”

There were also lighthearted moments. ST’s Rachel Au-Yong and Rohit Brijnath joked about their generation gap – while the former took up journalism six years ago and called her phone her “all-in-one” work device, the latter has about 30 years under his belt and remembers using a typewriter.

News reporting may have evolved but its purpose remains. Said a reader: “Keep up the good work, keep informing us. If we’re not informed, the world is a poorer place.”