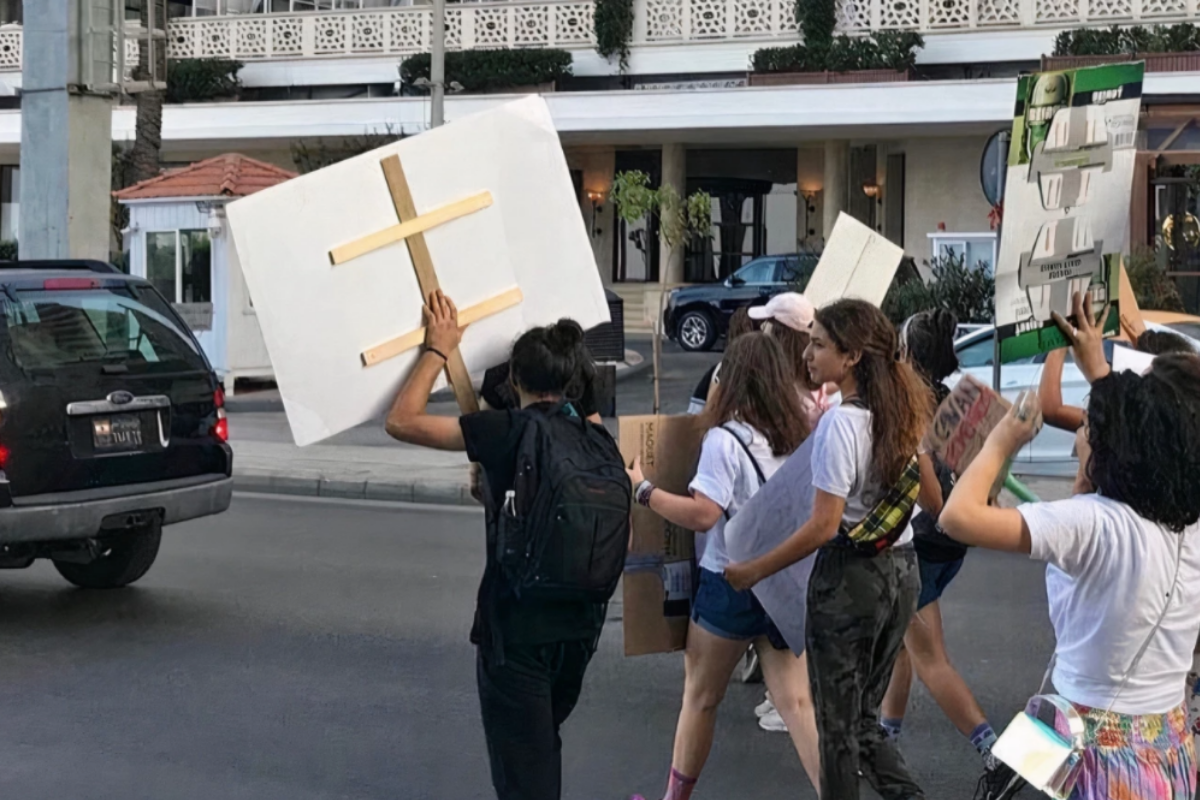 So, to start, could you give us some background info on what Skip the Straw Lebanon is and why you started it?

Skip the Straw Lebanon is an environmental campaign aimed at eliminating the use of plastic straws in restaurants and cafes in Lebanon. I directly collaborate with restaurants and cafés to help them switch to plastic-free alternatives and provide them with a ‘We Skip the Plastic Straw’ door sticker (made of recycled paper) once they have made the switch – as a way to show their customers their dedication to the environment.

As part of Skip the Straw, I also sell reusable glass straws at Lebanon’s first zero-waste store, EcoSouk, and started a petition to the Ministry of Environment to ban plastic straws across Beirut, which has now garnered more than 48,000 signatures!

I was inspired to start Skip the Straw Lebanon after watching a video online of a young woman from California who convinced her colleagues to stop using plastic straws and, after gaining enough traction, then created a campaign to make plastic straws illegal across her state. The documentary lay in my subconscious for quite a while and then one day I happened to come across a stand selling glass straws, I remembered the video, and decided to buy one. From then on, I made a pledge to stop using plastic straws and became more aware of the impact plastic pollution has on our oceans and marine life. I soon realized that a lot of other people weren’t aware of the plastic-pollution epidemic and so I created Skip the Straw Lebanon as a way of educating others on how we can move to a post-plastic world!

In your experience, how receptive have restaurants been to “skipping the straw” and going plastic-free?

Before Lebanon plunged into economic crisis, I found that many restaurants, especially smaller ones owned by the younger population, were very receptive to the idea of sustainability. They were taking real strides in replacing plastic items and trying to cut their waste. With larger restaurants it was more difficult, but generally all restaurant owners/marketing managers had positive attitudes towards our campaigning for plastic-free businesses. Unfortunately, when our economic crisis started a year and a half ago, it became increasingly difficult to approach restaurants as their main concern was trying to stay afloat – as opposed to thinking about sustainability.

In August of this year, Beirut was devastated by an explosion which left important resources (such as food and water) in great demand. Was your work – and other environmental advocacy – negatively impacted by this tragic event?

After the explosion, all efforts were going towards repairing homes, providing food and water to those who had lost access and raising funds for medical supplies. At that time, everyone’s concern was to help others. I truly believe that people in Lebanon, especially the younger population (who are often involved in environmental and other forms of advocacy) had the interest of the population in mind – because when you see your people covered in their own blood on the street, when you see your city, your windows, literally blow up in front of your eyes, your first instinct is to act.

On a positive note, a large-scale glass recycling movement developed after the explosion. People donated their broken window shards to local recycling companies and the shards were upcycled into traditional Lebanese water pitchers. Many, many people bought the pitchers (myself included.) These same recycling companies also helped to ensure that no rubble or other remains of fallen buildings were gone to waste. In this regard, I’d say that the environmental advocacy movement continued, albeit in a different form, after the explosion.

I constantly saw the phrase ‘We Will Rebuild Beirut’ on social media after the explosion. Given my environmentalist background, I thought about what I could do to help not only rebuild Beirut, but rebuild it green. This is where my idea for a large-scale, multistakeholder project came from. I will be launching the project later this year, hopefully. So stay tuned!

In 2019, Lebanon became the first country in the Middle East to open a zero-waste store. Similarly, with the establishment of groups like Fridays for Future Lebanon and yours, it seems like Lebanon is in the midst of an environmental awakening. Have you noticed a shift in the way the climate is spoken about recently?

Yes, definitely! The surge in environmentalism was particularly evident in 2019, before the pandemic, the explosion and the financial crisis. In the fertile period before the chaos, many environmental groups were gaining prominence and I noticed that our generation especially was becoming more aware of climate change and more interested in fighting for climate justice.

Now, with the plethora of crises that Lebanon is facing, it is difficult for any form of advocacy to gain traction. The public is too preoccupied with issues that relate to survival: getting food, medical supplies and internet access. But nevertheless we persist! Although I am not able to run Skip the Straw Lebanon right now, I am continuing my work in advocacy through an internship at a local nature conservation center as well as the large-scale project I mentioned previously.

Finally, what can people reading this – both within and outside of Lebanon – do to help Skip The Straw?

Skip the Straw Lebanon is all about cutting down on plastic – so, wherever you live, make changes to reduce your waste. By doing this, you’re helping Skip the Straw Lebanon (and so many other international campaigns) to eliminate plastic use! If you’re interested in our work, check out our Instagram page and follow us for updates!

This story, first published by Youth for Positive Change, has been shared as part of World News Day 2021, a global campaign to highlight the critical role of fact-based journalism in providing trustworthy news and information in service of humanity. #JournalismMatters.